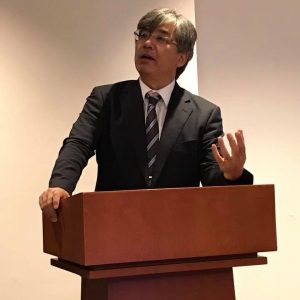 Prof. Shigeto Sonoda is a professor of sociology and Asian studies at the University of Tokyo.  After his 19 years’ service for private universities, Prof. Sonoda went back to his alma mater in 2009 when he was appointed as professor both at the Interfaculty Initiative for Information Studies and Institute for Advanced Studies on Asia (former Institute of Oriental Culture) .

Prof. Sonoda initiated a lot of research/academic activities, and the most recent ones are “Frontier of Comparative Studies of Asian Studies” (2010-12 FY)  “Educational Program for Young Scholars on ‘Asia Globalization Studies'” (2009-2012 FY), both of which were financially supported by Japan Society for Promotion of Science. Prof. Sonoda is now one of the core members of new type of graduate education program “Integrated Human Studies for Cultural Diversity” in the University of Tokyo. Prof. Sonoda has also been serving as director for Beijing Center for Japanese Studies at Beijing Foreign Studies University in China since 2018.

Due to his commitment to ITASIA course in Graduate School of Interdisciplinary Information Studies, Prof. Sonoda will be able to accept only those postgraduate students or scholars who will be able to write a thesis / academic paper in English.